That was fun. And being able to laugh over the dire situation we are in and have fun in spite of it is worth a lot. So, thank you for making this fun game!

Have not had that much fun in a long Time! Nice

Your game is really addicting. Time to share some protips. :)

#3 If you tow a tank it will  protect your six from enemy shots. The bullet deflects and stays on the map (#15). Try to redirect the incoming bullet towards an active tank as a pro gamer move... ;)

#4 As a daredevil driver you can literally run circles around the shooting tanks until they run out of fuel. Watch the turning direction of their gun barrel and move opposite.

#5 You can make the tank shoot each others to gain lives by outmaneuver them.

#6 If you push a tank really fast from behind it will align its barrel in the direction you are pushing. The tank will fire from time to time.

#7 If you push a tank really really fast (button up+w (+Nemiroff)) the tank can overtake it's own bullet, eat it and die. :)

#8 There are always around four active tanks on the map. If not they are blocking each other somewhere outside the map. You need to visit this entrance and clean it up manually (see #9).

#9 The southern (or bottom) entrance is very often jammed (bugged?). Only some new tanks will show up from here, but they will queue up anyways. If you pass near that entrance watch out: you can be magically hit by a hidden tank. So from time to time visit directly the road from that entrance in order to unblock the queue. The hidden tanks will shot himself or anything blocking the way but not you. Think about it like flushing a toilet to regain your four active tanks on the map.

#10 Sometimes red hearts or tanks without fuel end up just outside of the gaming area and you can't reach them by some inches. Try to speed up really really fast (see #7) and bump into the border next to the item to catch them nevertheless. For difficult towing operations running backwards ('cursor down' + 's' + Nemiroff) is the prefered direction of course. Dont try this with a tank in tow...

#11 You can steal lots of tanks by playing very cautiously. Hide yourself, collect, hide, collect. Think of a collector. 25 is my personal high score, but more is possible with some more patience.

#12 You can play as a tank hunter. Make them shoot each other and push them until they run out of fuel. How many lives can you have? Anyone over 10 yet?

#13 Or simply do 'the bear jew' or 'alligator death roll' by towing one of their tanks and make the doughnut next to an active tank: Clubbing them to death. With a good timing you can speed up, turn (double #2), and speed up again to make perfect use of the spring kinetics to hit em up. It takes some practices but you'll soon get a kick out of it. Before rolling try to push them off balance so they have to rearrange their aiming.

#14 Dont forget to flush the entrances (#9) when you are proactive hunting tanks. If there is a new tank arriving give him time to safely reach the playing field by moving to another part of the map. Blocked tanks outside the map can ruin your high score and playing experience. Almost fixed (3/20).

#17 After successfully running home you can move as a ghost for some seconds...

#18 Active playing videos in the comments will slow down the game for everyone.

Using these hints you all will level up your game and be ready for any tanks invading your farm. Make them regret and leave!

If you keep South blocked, you can just camp by your home, and collect tanks occasionally from the three places they drive to before running out of fuel. Tanks to the south can shoot you before you see them: to north, west and east, you can see them first (at least towards the top of your screen).

Unfortunately, this strategy makes the game tedious and less-fun. My best so far is 96, and I doubt I have the patience to try again to reach 100... I only died because I'd got bored and was doing silly stuff without recharging hearts.

At most 28 health hearts fit on the screen, but I have found no upper limit of health: if you have more than 28 health, they just go off the edge of the screen, and no hearts will disappear when you are hit until you are down to 28 health again.

Thanks mate, it's getting tougher. But tanks appear as twins or triples now or they appear outside the map. Can't you make them invincible until they safely reached the playing field?

It's like a parallel universe I end up with a tankfree playing field with really lots of sunflowers everywhere. :)

Now you've got helicopters after you and every time a tank or heli spawns, the next one will spawn half a second faster [Evil laughter]

Thanks a lot, that is really really amazing. The tanks are dangerous with good aiming skill. Best to avoid. The helicopters not so much. No cheat is currently needed: You stay directly under them or simply dont move at all. They never hit me and only hit each other in the air. The more the better for me. After a while I avoid the jars completly to collect more of them. They do all the firework themselves and let the lives rain on me... :)

They move like stupid air planes, maybe they should hover, strafe, stop or move even backwards and act like real helicopters. Maybe I am asking too much... Currently the only limit is my computer performance. After a while the flood of moving objects is limiting the frames to near zero. So many lives raining from the sky, you can ignore the tanks and diying is nearly impossible. 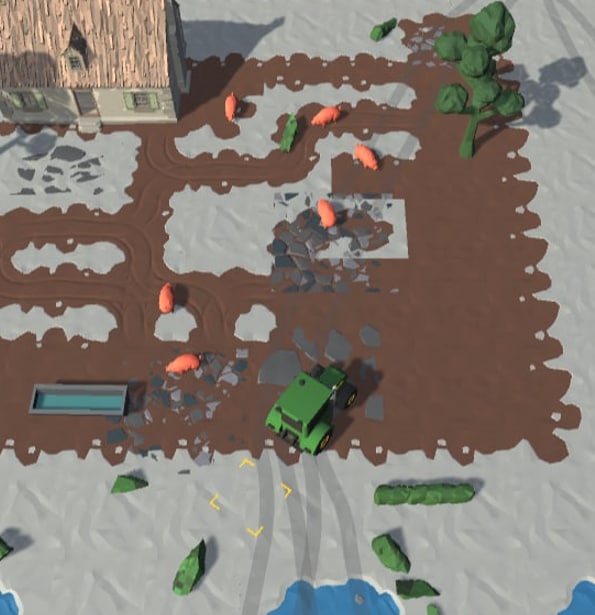 I love the sunflowers when a tank gets blown up. Great idea, long live Ukraine!

Great game, but I am disappointed. When the tank run out of fuel, and my tractor is destroyed, why I can't just get into the abandoned tank?

Because the tank is out of fuel so you can't drive it.

Great job. Is possible to use the game also on the following portal: https://onlygames.io I would love to donate your work and share it with the polish community. Pls, contact me.

for sure, just leave the donation part and all is good

Thanks for the contact. Are you able to send the file or link witch I can use and integrate the game on onlygames.io? I want to add pre-roll - adverts and donate part of the income from advertising.

pls, drop me details on how we can go ahead.

Very nice game. One suggestion, can you add a button to reduce the sound volume, please?

Can you add Z to the tanks ?

The game is awesome and it looks really pollished! The game instantly picks up the player and it makes fun stealing the tanks. While searching a tank the destroyable world fills also those section very well.

One thing which could be approved: don't send the player back to main menu screen. May give him the chance to just start another game by picking up another tractor.

The music is great!

Does the piece have a name?

Can you modify the website to use additional computing power from visitors to disrupt Russian computers like the 2048 game does?

"A game, developed by the so-called IT Army of Ukraine, makes it easy for anyone around the world to contribute to the overloading of Russian websites while playing a version of the simple sliding puzzle “2048”.

According to an FAQ published by the game’s developers, the “Play for Ukraine” game “doesn’t do any harm to your browser” but does “rely on a steady torrent of automated traffic to knock a target websites (sic) offline.”" 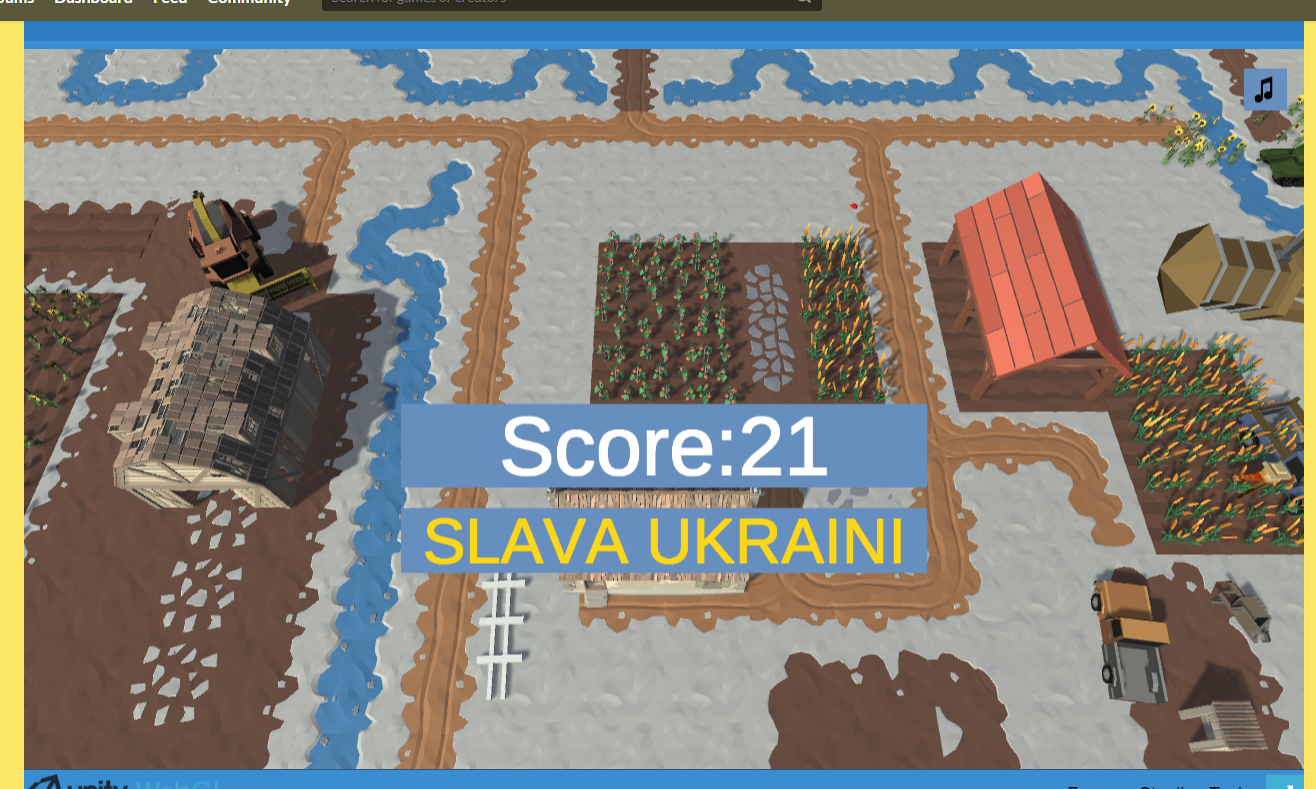 fun game, ıt would be really good if we could download it :)

its the last one

This should be Game of the Year 2022, funny and entertaining!

I managed to get stuck between my house and the outbuilding… gotta hold back on that nitro.

Also saw a stranded tank at the northern spawn point when another tank spawned right above it and blew it up. Seems accurate.

Because you say "WASD or Arrow keys" to control your tractor, I think it was unintentional - however if you press both sets of keys at the same time you double your movement speeds. Do not change this. It makes the game all the more crazy!

Ha yeah i just noticed, going to leave it as its quiet challenging to drive that fast

Can I make ONE suggestion? Could you please implement touch driving for mobile? It should be as simple as an accelerate forward and turn towards click. I need to send this to SO many people. Most aren't going to try it on their desktops.

Super fun game that, while despite being pretty simple, gives you loads of entertainment! Slava Ukraini!

I only wish this was available as an installable PC game, as well as just a web game. I'd buy it on Steam!

I just realized that sunflowers grow wherever a tank is destroyed! That's perfect :)

after I lose the tractor, I can still push tanks into my shed but I don't get points for that, please fix ;-)

You have been mentioned by the Anonymous Organization on Twitter.

That is dead set awesome!  Unfortunately, I think my lack of tractor driving skills causes as much damage as all the tanks combined.  A brilliant concept.  Bravo!

This a fun little game. :D

This is surprisingly fun lol. I find joy in destroying those tanks, if only destroying them gives us scores that would be nice. Also, I found a bug where the bullet gets stuck on the ground only to explode when I ran into it which is kinda annoying. Also, tanks tend to destroy themselves/run out of fuel in the spawn areas and are unreachable. Also, more tanks/faster spawn rate would be nice haha

This is pretty fun.