Here we are with yet another update squashing bugs and adding features. From mountains to colored fog and sun shafts, we have something for everyone.

You can now orbit camera by holding Left Alt. It orbits around the point your mouse cursor in the scene.

Toggle land button. So you can hide it, for when you want to bring in your own landscape.

Ground fog adjustments to let you change the color, height and density.

You can change the color of the Sun Shafts.

Before you could turn on Slow motion by holding Right Ctrl, now you can change the time speed with the mouse wheel and bringing it all the way down will pause time.

Linux users had some issues with Alt tabbing and also bringing up file browser, so ive added a toggle to lock mouse cursor. Also handy when you have dual screens and are streaming.

When placing mountains and the large rock prefabs, it now toggles off the rock layer so they dont spawn on top of each other.

Added an invisible background for the right side icons, so that your paint cursor doesn't keep appearing between the icon gaps.

When sculpting the landscape, use the mouse wheel to change the size of the brush. (Have got someone better than me to rewrite the sculpting part, so you will see some major improvements in the future)

When pressing save and having a paint tool open, it would accidentally paint a tree or whatever tool you had open after you clicked. Now it closes your paint menu so you dont paint in the scene when saving or loading.

New screenshot script that is hopefully better than what we had. It now captures the lensflare at high res. You can go to settings and set the screenshot resolution for the photo icon bottom right. It saves as PNG as i think linux users were having issues with jpg.

Middle mouse drag is pan and now you can invert pan direction in settings.

Hide mouse cursor after a certain amount of inactivity has been turned off, due to it messing with the wacom.

If you import a huge model, it now gets automatically scaled to fit your landscape and the transform tool will adjust its sensitivity accordingly.

Sculpting keeps working even after turning off the sculpt option. Fixed

Sun distance was increased in the last build, but i forgot to scale the sun up, so now thats fixed.

You could place houses when over a ui element. Fixed.

In some cases the starting logo did not disappear. so now i delete it to make sure it goes away.

Pressing space to go full screen let you accidentally click the buttons on the right. Fixed.

When exporting from Blender it capitalised the bump into Bump, causing a normal map not to import. Fixed

The new fog and sunshaft colors dont get saved, as i didnt want to break previous saves.

Let Nature Flow from your Brush

My cursor disappears behind the FS container and loses it's functionality? 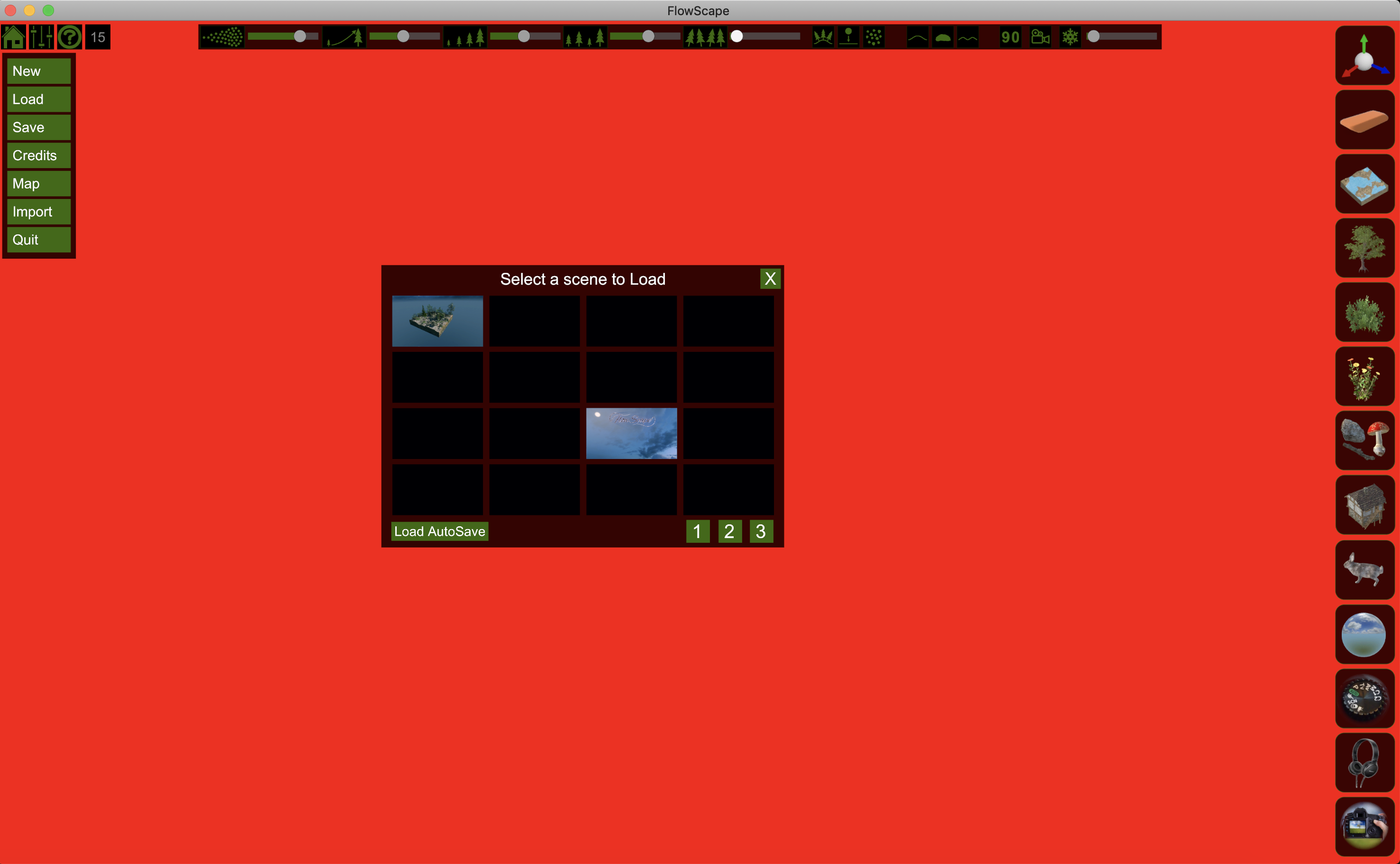 I just purchased a mac version 1.5 and after I save and load I got a red screen， don't know why and don't know how to solve the problem.

can I get a refund cause I cannot play

Wow nice bug! Haven't seen that one before. Try running on medium or low and if it doesn't help, just ask itch support for a refund.

I have the same problem, and I'll try as you suggested, but I don't want a refund. If at all possible, I want to use  FlowScape.

I love this software. But found an issue you should be aware of.

I loaded FlowScape and settled on the default layout.

Without doing anything, I loaded "Task Manager".

I found that this app is killing my video card resources (power usage).

In idle, running only Flowscape and a Virus app (Malwarebytes), it is consuming 54.1% of my GPU Power.

I can't imagine that this is normal. Can you fix this?

Thank you in advance.

You can uncheck adaptive quality, which will set everything to 11 if your camera isnt moving and set your preferred quality settings manually.

Also by default i have the app to run in background, which means even if you alt tab out, it is still running, i had to do that to stop the file browser from misbehaving.